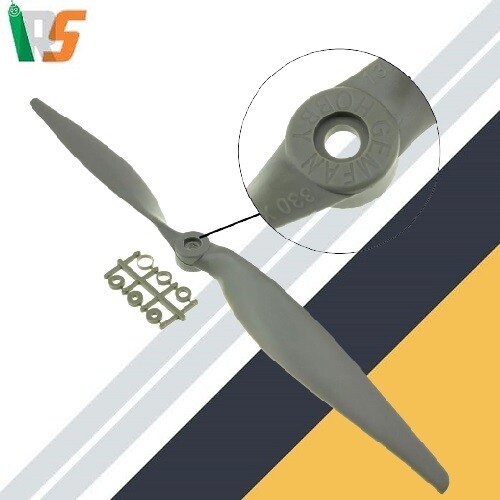 (Product parameters are measured by hand, there is slight

Explanation of nouns: pitch
The blades of the propeller have an inclination to the rotating plane. Assuming that the propeller rotates in a non-flowing medium, every turn of the propeller will move forward for a distance, and a continuous rotation will form a helix.
The distance of the propeller formed by rotating one circle of the same blade is called pitch.

This “pitch” is the pitch of the helix formed by the rotation of the blade.

The pitch refers to the distance (theoretically) that a helicopter’s rotor or fixed-wing propeller rotates 360 degrees and then moves up or forward. It’s like the length of a screw that can be screwed in after one turn. The greater the pitch, the greater the distance to advance, and vice versa. However, it is difficult to measure the actual pitch, so the diameter and pitch (in inches) of the propeller with constant pitch for general fixed-wing aircraft will be marked so that it can be used in conjunction with the appropriate engine. Most of the fixed pitch helicopter propellers are customized for a certain class of aircraft, so only the diameter is indicated. Variable pitch helicopter can easily reflect the pitch size and variation range by measuring the angle of attack (windward angle) of the blade.